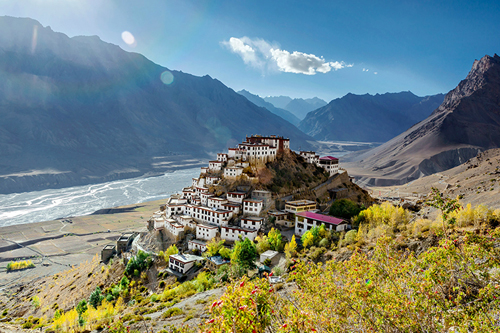 Bike tour packages to Spiti are becoming increasingly popular. The beautiful valley of Spiti lies in Himachal Pradesh, land of the Himalayas and is a part of Lahaul and Spiti district, already a popular Indian Himalayan state amongst bikers. This very reason has prompted tour operators to make customized tour packages to Spiti. The literal translation of the word “Spiti” means “The Middle Land” and the name holds true as it lies in middle of Tibet and India. With lot of bike tour packages to Spiti being offered, the place is one of the favorites’ among adventure travelers, as the place promises the most treacherous roads to be crossed. Most popular bike tour package to Spiti is a 10 day tour package, allowing the adventure lovers to cross the Rohtang and Kunzum Passes giving a glimpse of the magnificent Himalayan Range running across the region. Adventure seekers get a feel of the remoteness of the place on the bike tour package to Spiti as they are unable to find any fast food chains once they leave from either Shimla or Manali. Majority of the population of Spiti is Buddhist. The highest locations in Spiti are star attractions in themselves on the tour packages.

·       Kaja – This is main city of Spiti valley and the home to world’s highest petrol filling station.

Summer season 2023 extending from March to June. The temperature falls in the cool and comfortable zone of 15deg C. It is possible to opt for bike tour packages during this season of Spiti. There are many activities which one can undertake in the Spiti tour package such as trekking, camping, mountain biking and hiking.

You should also make it a point to visit Chitkul village, which is the last village on the Indo – China (Tibet) border, Kalpa, which is also popularly known as the suicide point as this point has one of the largest straight falling depth in the world, Geu Monastery, which is home to 500 years old mummy and Tabo monastery, located at 40km from Geu Monastery, Chandratal Lake and Kunzum La Pass.

Winter season 2023 extends from October to February. This is a challenging season as most of the time the roads are blocked due to ice and heavy snowfall. In general, this season in general accepts very less tourists as the temperature plummets to as low as -30 deg C, and so in this season also, February is considered to be the best season for  a tour package. The tour packages to Spiti in this season mainly focus on one of the most exciting events it hosts, and this is The Snow Leopard Expedition. Snow Leopard generally lives an isolated life on the high peaks of the Himalayas. After a long period of hibernation, this animal comes out if its caved life to lower reaches in search of food and warmth. Spotting a snow leopard in its natural habitat is one the major attraction of the winter tour expedition of Spiti.

1Chandra Taal – Located at an altitude of, 14,100 ft, the Chandra Taal is a niche protected lake in the amazing valley of Lahaul and Spiti. Also, known as the Moon Taal, the lake is accessible only in the months of June – September, remaining frozen for the remaining part of the year. More popular amongst high altitude adventure lovers and trekkers, the lake is surely a piece of nature’s untouched beauty with scattered wild flowers adding to its luster.

2.       Suraj Tal – Crossing Baralach La, just below the high pass, at a height of 16,043 ft is the small yet gorgeous Suraj Tal, meaning the Lake of the Sun God. The small lake forms the source of the Bhaga river, which flows through the Lahaul valley, before merging into the Chandrabhaga River.

3.   Kaza – Located at an altitude of 11,980 ft, Kaza is the biggest town of the Lahaul and Spiti valley and is also the commercial centre. Being centrally located, Kaza is known for its unparallel natural beauty and its proximity to lakes and monasteries and high mountain passes located in the valley. It thus, becomes the main camping site for high altitude trekkers and hikers. Kaza also hosts many local festivals entrenched in colours and fervor.

4.     Nako – Situated at an altitude of 11,893 ft above sea level, Nako is a small village with fluttering Buddhist prayer flags, encased by Nako Lake and Nako monastery. Culturally, tilted towards the Spiti valley, Nako is the border village of the Kinnaur district. Picturesque as it comes, this village features a walking tour taken up by the local Youth Club, allowing the travelers dip in the calm melody of the nature around.

5.    Tabo – Located over 10,000 ft above sea level, this small town in the Spiti Valley is famous amongst tourists for Tabo Monastery. The monastery itself has engraved sculptures and images, resembling those of the Ajanta and Ellora caves. Thus, Tabo is also famously called and the Himalayan Ajanta. Tabo is also the house for the oldest operational Buddhist monastery in India. Worth mentioning temples of the Tabo Monastery are the Golden Temple and Mystic Mandala Temple.

6.    Dhankar – It is a small village located at an altitude of 12,774 ft and is also a Gompa, situated between the towns of Kaza and Tabo. Perched at a height to overlook the confluence of Spiti and Pin rivers, Dhankar is a fort monastery. The Dhankar fort and Dhankar lake, situated on an elevated hill top, gives a photographic view of the entire village and the natural surroundings.

7.  Langza – Langza is famous for the mighty Buddha Statue, night photography and highly preserved fossils of marine animals and plants. Famous amongst trekkers for reaching the high altitude lakes, Langza is also a place to relish some of the best home stays in the region.

8.    Key Monastery – Overlooking the Spiti river, Key Monastery is located at an altitude of 13,667 ft. It was established in the 11th century by Dromton, student of the famous Tibetan teacher, Atisha. It is also known for its beautiful murals, thankas and rare manuscripts, and peculiar wind instruments that form part of the orchestra whenever Chham is enacted in the gompa.

9.    Kunzum pass – Situated at an elevation of 14,931 ft, Kunzum Pass is one of the highest passes, higher than the Rohtang Pass. The Pass basically connects the Spiti Valley to the Lahaul Valley and Kullu. Generally open through June to November, BRO monitors the closure of the Pass. Given the scenic beauty the pass offers to travelers and adventure bikers, it is also known amongst photographers for its panoramic view. Visitors on the way, stop at the temple of Goddess Kunzum Devi and seek her blessings for a safe passage. One can also spot in trekkers as the pass serves as the starting point for a 15 km trek to the Chandra Taal.

10.   Pin valley – Perched at an elevation between 11,500 ft to 20,000 ft, the Pin Valley is an epitome of isolation and silence to loose yourself into. With the Pin river running across the valley, before drowning itself into the Spiti river, it gives the valley stark contrast of green pastures, rainbow coloured flowers against the backfrop of barren mountains. The valley is also the home for flora such as Juniper & Birch trees, Myricaria Shrubs, Bhojpatra and fauna such as Siberian Ibex, Bharal, Weasel, Red Fox, Marten, Woolly Hare, Tibetan Gazzle, Himalayan Marmot, Blue Sheep, Himalayan Brown Bear, Himalayan Black Bea etc. You get all these under the single geographical area of Pin Valley National Park.

11.   Kibber – A small village in the Spiti valley at an altitude of 14,200 ft, Kibber is the house of Kibber monastery and Kibber wildlife sanctuary. Located very near to kaza, Kibber is well connected by road and is mainly an agricultural village, with lush green pastures welcoming you. The Kibber wildlife sanctuary is a boon for people studying and practicing Tibetan medical systems, as the sanctuary mainly is a source of plants having relevance and usage in the Tibetan culture and medicine.

12.   Gue monastery – In the valley of Lahaul and Spiti, lies this small and colourful monastery, on the way to Tabo, The Gue Monastery. The monastery is famous for the mummified remains of the Budhist monk, Sangha Tenzing, dating back 500 years. The mummy was found in a sitting position with skin and hair intact.

13.   Hikkim – One of the highest year round inhabitated places in India, Hikkim is located at an elevation of 14,400 ft, located between Komic and Kaza in Lahual Spiti valley. The place is famous for the post office, which is located at the highest point in the world. The post office is in function till date and allows tourists to send in post cards to their loved ones. Hosting visitors from across regions, Hikkim is also famous for cozy homestays and homely cooked meals. Hikkim was also the site for highest polling station and was recorded with the Limca Book of Records.

14.   Mud valley – Mud Valley, located at an altitude of 12,139 ft, is the dead end road for travelers visiting the Pin valley. The road literally ends here, but, the majestic natural beauty just starts. The small village, has everything is a single frame, snow clad mountains, overlooking the green pastures with river flowing through the village to sustain the small population through farming.

15.   Trilokinath Temple – Constructed in the 10th century in the devouring Chandra Bhaga valley, the Trilokinath temple, is located at a distance of 45 km from Keylong. The temple is unique is the sense that it the third most scarred pilgrimage of Lord Shiva after Kailash and Mansarovar. It is the only temple in the world where both Hindus and Budhists pray to the same deity. Makar Sankranti, Yor, Bhyarzee and Pori Mela are the local festivals celebrated at the temple.

16.   Tashigang – Want to escape from the busy city life, and just surrender yourself to nature, then Tashigang is the place. Located at an elevation 15,255 ft, this small town village in Spiti valley, offers the utmost peace , silence and solitude. Walk the green grass, stroll the village and shop remembrances for a pristine vacation.

17.   Kalpa – Kalpa is famous for red deliciousness you get from local apple orchards. It also houses many beautiful temples and monasteries giving a glimpse of local cultural heritage. Situated very near to this place, is the Suicide Point, which is basically a dangerous trench with vertical slopes. Kalpa is also the starting point for the trek to Chakka, at an altitude of 15000 ft.

HOW TO REACH SPITI

Road is the most convenient way to reach Spiti as the nearest airport is at Kullu and train station is also far off located. By road, the popular bike tour packages to Spiti follow approaching Spiti from Simla and exiting from Manali. This route allows bikers to experience both, Kumzum La high pass and Rohtang La high pass. The normal route which is taken during the bike tour to Spiti is :